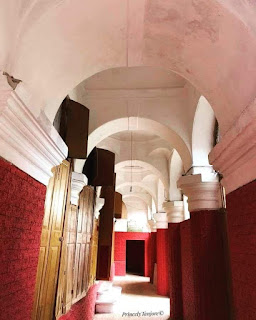 In order to preserve the heritage of the illustrious maratha royal dynasty of Thanjavur and the  antiques of King Serfoji ll, H.H Prince Tulajendra Rajah P. Bhosle, 4th descendent of King Serfoji ll had formed trust and proposed to open a museum at "Sadar Mahal" in the palace premises in the name of  "Maharajah Serfoji ll memorial hall".

The museum was declared opened for public viewing in the year 1997.

The Sadar Mahal Palace is more than 190 years old and is situated north to the Krishna Vilas Tank, which is now closed. This was the residential palace of King Serfoji II and his descendants. Performing arts like drama, dance, music and other art forms were performed at the Sadar Mahal Palace. Proof of this is evident from  Marathi Modi documents in the Thanjavur Maharaja Serfoji's Sarasvati Mahal library (TMSSML).

The arts and artefacts collected by King Serfoji II  are displayed in the erstwhile residential palace of King Serfoji.

The museum was opened by Prince Tulajendra Rajah ji in an  aim of showcasing the contribution of Maratha kings to Thanjavur, South Indian culture and literature and to make the general public aware of Thanjavur maratha history.

The hall was restructured and repainted, it originally had some stucco work on the upper borders of the wall. On display are household articles, costumes, gold and silver ware, armouries, earthenware, manuscripts, wooden and ivory objects, various kinds of paintings like oil, water colour and so on. A small garden had been developed at the place where the Krishna Vilas tank stood. A secret underground passage located on eastern side of the Sadar Mahal, which was told to be in use till 1855 before being closed, had been reopened for public viewing.

(Except on National Holidays)

Popular posts from this blog